I started training for the Paris marathon on the 2nd of December 2019. Four runs every week including one long distance run on the Sunday’s. I woke up early in the morning to do my runs or I did them in the evening after work. I missed some fun activities with my family as I had to do my long runs and I knew it would take me more than one hour.

Whether it was a dark cold morning or a rainy evening, I always did my best 💪🏼.

NOW… the Paris marathon has been postponed from the 5th of April 2020 to the 18th of October 2020. This means that I have to start a new schedule this summer to train for October. Also, I will choose a schedule that is a bit more difficult. This is because I want to go for my desired time, to finish a marathon in 4 hours (my ultimate goal for this marathon) and I’m fit enough to push a bit more 🏃🏻‍♀️.

Here is what I have learned for the past 13 weeks of training (which I will improve in the next few months):

I also went to the sport doctor which told me that everything was fine with me and I can easily run a marathon in 4 hours. Wiehoo!!! Always good to hear 😄.

For now I want to run 3 times a week and do some strength exercises before the next training starts which will be somewhere in June. I am also excited, and happy that I will be running in a much better weather (hello spring and hello summer 🌸☀️)

P.S. Here is a picture of how my brain and heart function during a run -.-” 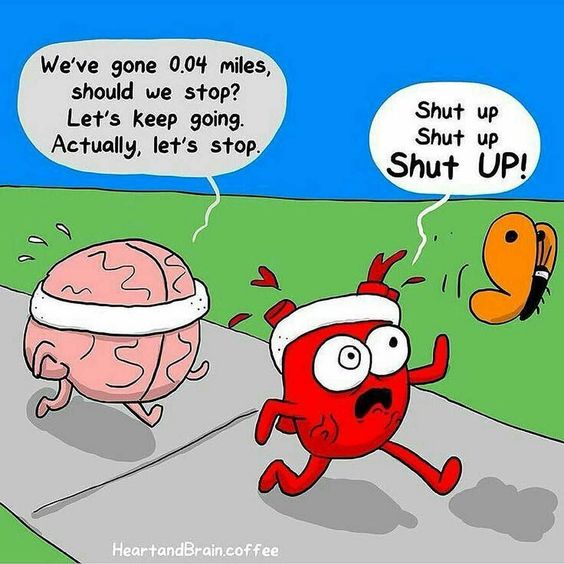 I have excited news! I am going to run marathon number 4 (side note: number four is my lucky number). As some of you know, I have started this blog to share some positivity around but also write about my running journey. And also some of you know that I have ran 3 full marathons and 2 half marathons around the globe. I love it, and it makes me feel free and strong! But I have not done any marathon or running for the last couple years. I was not motivated and somehow I thought that I was not able to ever become a good runner.

A couple weeks ago I started looking into exercising and working out. I don’t like the gym, it is just not my place to be. So I decided to run again. Give it my full attention and dedication. And so I signed up for my 4th marathon, in one of my favorite cities, Paris!

I will be standing at the start line on the 5th of April 2020 and hoping to finish with a great time! The time that I always wanted. I will also do this differently, I am more serious about my health, training schedule and my knowledge about running. To still make us of this blog, I will also write about my journey and what is does to me. Some real tips and tricks that I can give you based on my running experience.

The good thing is that I am a beginner, and I am starting with a beginner’s training schedule. This also means that I do not know everything and therefore I am eager to get more knowledge about running. I already have three books that tell me more about running better, faster more efficient and extra home exercises to keep me going.

And because I am passionate about writing and running, I will share with you what I learn.

I hope to inspire and to get you motivated to start doing something you love.

Last week Saturday I ran the Stockholm marathon, it was in one word AMAZING!

The day before I went out, not such a great idea but I did have lots of fun, so I do not regret that for sure. The next day I woke up on time had a good breakfast and took my stuff and went to the Stadium. Lots of people were there, many supporters and a great atmosphere. Everybody was ready for the marathon!

So I changed into my SuperMaani outfit, got ready and went to the bathroom one more time just in case. Then I headed to the starting line. I was alone but that was okay.

People started running at a slow pace in the beginning, and I took it slow as well. Over 16,000 runners were there to run this amazing marathon in this beautiful city Stockholm.

I enjoyed every bit of it, Stockholm is so beautiful! The weather was great, first it was raining a bit and then the sun was shining. The volunteers were great as well as the supporters along the side. They had many snacks at the power stations which was great, it’s good to have a variety of snacks while running.

I was dressed up in pink as SuperMaani. Many little girls along the way pointed at me and their parents. I couldn’t help it but to give them all a high five, and waving at them. I did feel like a SuperWoman running the marathon. The feeling I had while running was just great, it felt like a meditation. The route was amazing and the places that where we were running was great! Although the hills made it a bit harder than I expected. I was amazed by the types of people I saw, old and young, “fat” and slim, all of these people were just so happy and I loved to see them all running.

I got so tired after 38KM, I couldn’t move anymore and walked for almost 3KM. Then when I reached the last KM I started running fast! And there I was again at the stadium, I saw the finish line and took a sprint! I was so happy and emotional, my second marathon is now history, I DID IT AGAIN!!!!

At the finish they were giving massages to the runners, beer, snacks and hotdogs. I went and picked up my marathon t-shirt and had some snacks. A friend of mine picked me up and took me to the hotel.

That evening I just snuggled in my bed with lots of snacks watched 2 movies and slept like a baby!

The next day I woke up early and was ready to meet another friend and enjoy Stockholm one more time.

Next year I will definitely go and run again, a marathon like this is hard to miss.

This blog is going to be about all things in life that can help you grow and prosper.

Sometimes we have great experiences and sometimes we come across learning experiences. Nothing is good and nothing is bad except the way you react towards it and what your perspective is.

Take what you wish from my blog and adopt that into your life, leave behind what you do not agree with, and form your own life.

Embrace the change and welcome once again!